For the boss of the same name, see Pyramad.

Pyramad is a hero that the player can pick in the Battlegrounds game mode. 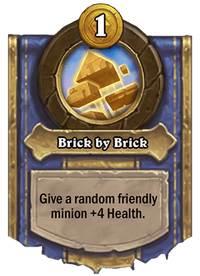 Pyramad has a fairly strong early game, as 4 extra Health lets a minion trade more hits before it can die. Having extra Health on a Taunt minion or anything with least 2 Attack lets it trade well against weaker Tier 1 minions effectively, helping Pyramad be able to rank up in the early game more safely.

On the first turn, if a Murloc Tidehunter is offered, take it, sell the Murloc Scout, and use your hero power. You have essentially just made a Vulgar Homunculus without taunt or doing 2 damage to yourself. This maneuver will allow you to win most turn 1 fights.

Pyramad is also good with Tier 1 minions that scale in stats, such as Murloc Tidecaller, Micro Machine, or Wrath Weaver. In exchange for taking a small hit with these weak minions on Turn 1, Pyramad can rapidly boost their Health to insane levels.

Pyramad is highly compatible with Murlocs for several reasons. Murlocs tend to have high Attack and low Health during the early game, which causes their early game and midgame to be weak; Pyramad can supplement their low Health, and thus shore up their weak early game. Since Murlocs scale well into the late game, selling them isn't a priority, so there's less chance of having your Hero Power "wasted" on a weak minion you intend to sell. On top of that, Murlocs can be given Poisonous through Toxfin to make buffing their Attack stat irrelevant.