Professor Putricide is a retired hero that the player could pick in the Battlegrounds game mode. 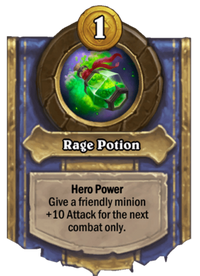 Professor Putricide's Hero Power gives a huge Attack boost to a minion for one combat, giving it a large enough damage boost to blow through a minion in the early to mid-game. While the damage is impressive, it's completely wasted if it hits a minion with Divine Shield, worse if they also have Taunt. It's can also pose to be problematic against Deathrattle minions that want to get killed off quickly and makes it more likely for them to die if they don't already have Taunt. Putricide's Hero Power drops off significantly in the late game, being only marginally useful against Demon and Beast builds.

The best minions to use his Hero Power on are cleave minions like Cave Hydra and Foe Reaper 4000 that multiply the effectiveness of his Hero Power. If the opponent has Divine Shield minions, the buffed minion can be placed later in the attack order. In some cases Zapp Slywick is a good target if the opponent's backline minion is buffed. Alternatively, use it on a minion with Divine Shield since they can deal damage at least twice, or on an Annihilan Battlemaster to counteract its normally weak Attack. Another good minion to use the buff on is Fiendish Servant, which can distribute its huge Attack buff to your other minions, especially if it's Golden and you have Baron Rivendare.