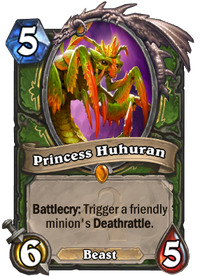 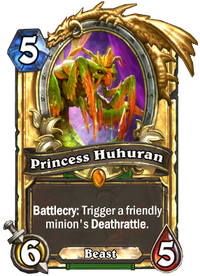 She flitters around Ahn'Qiraj dreaming of the day she will meet a sweet prince, whom she can lay thousands of eggs with.

Princess Huhuran is a legendary hunter minion card, from the Whispers of the Old Gods set.

Princess Huhuran can be obtained through Whispers of the Old Gods card packs, or through crafting.

This works well in a general Deathrattle-themed deck, and in combination with minions with powerful Deathrattles. The minion itself has decent stats and its Beast type allows for additional Beast-related synergy.

Despite having fair stats, her large mana cost makes it difficult to combo with other Deathrattle minions, even ones that are played on curve. Terrorscale Stalker is a much more flexible replacement, not to mention you can have two of them in your deck.

Summon
Soon I will be queen!

Princess Huhuran is a large silithid wasp, and the fourth boss of the Temple of Ahn'Qiraj. Defeating her requires very high amounts of nature resistance on all players.

Before the Great Sundering, Kalimdor, the ancient continent of eternal starlight, was a nurturing mother to all of its creatures. At the continent's center was a mysterious lake of incandescent energies, the Well of Eternity. It was the true heart of the world's magic and natural power. From this magical ether the silithid were born. As the fallen Old God C'Thun recognized their appearance, it attempted to sunder the world that it once held in its merciless grasp. The Old God created avatars from the silithid in its own image. These avatars were eventually known as qiraji. Sapient and with thousands of years the qiraji worked feverishly to build a force capable of laying waste to the world that would betray their god, with the silithid as their minions.

Silithid can range in size from a normal insect to gigantic. Size seems to depend on how long the silithid are allowed to develop in their egg stage. It appears that size is also directly correlated with colony size.