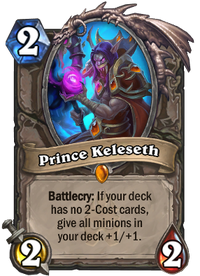 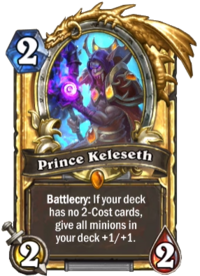 Battlecry: If your deck has no 2-cost cards, give all minions in your deck +1/+1.

Three Princes stand before you. This one wants to buff his brothers.

Prince Keleseth is a legendary neutral minion card, from the Knights of the Frozen Throne set.

Prince Keleseth can be obtained through Knights of the Frozen Throne card packs, or through crafting.

Prince Keleseth is a card that has a powerful effect, but a deck-building restriction that requires a deck to be built to accommodate it. Being able to buff all future minions is a very powerful effect, especially early on in the game in a deck like Zoolock, that carries a lot of small minions. The restriction can be detrimental, and not drawing Prince Keleseth can significantly lower the winrate of decks choosing to build this way.

Unlike The Mistcaller, Prince Keleseth does not buff minions in the hand, and therefore can not be used to gain an immediate advantage, instead requiring you to draw the buffed minions from your deck.

Rogues can use Shadowstep to activate Keleseth's Battlecry multiple times even on curve, making him a game-winning card if this combo is used early on.

Summon
Truth is found in death.
Attack
Blood will flow!

Prince Keleseth (pronounced (KEHL-eh-seth) was a member of the San'layn who served as the ruler of the southeastern reaches of Northrend — specifically as Scourge overlord of Howling Fjord — and as a representative to the vrykul.

Keleseth claimed to have traveled across the world and made several interesting discoveries, such as the fact that with the proper amount of "encouragement" one can extract all the truths that a man dares hide.

The Lich King deployed Keleseth to Utgarde Keep in hopes of harnessing the vrykul's potential for destruction. Upon arriving, the ambassador found a people who were more than eager to assist the Scourge, and the keep proved to be an excellent staging point for terrorizing the Howling Fjord. Keleseth acted as the Lich King's eyes and ears in the Howling Fjord, and his primary residence was Utgarde, where he assisted Ingvar the Plunderer in organizing raids on the surrounding territory.

After the Forsaken's victory over the Alliance's North Fleet in the Howling Fjord, Keleseth appeared at Vengeance Landing with four Dragonflayer vrykul to taunt High Executor Anselm and invite the Forsaken to rejoin the Scourge. Anselm ordered his archers to fire at Keleseth, but the blood prince teleported behind the vrykul so that the arrows killed them instead of him. He then used his magic to drain the souls of Anselm's troops before vanishing. Anselm proceeded to send adventurers to kill Keleseth inside Utgarde Keep. During the assault on Utgarde, Keleseth was slain by the invading heroes.

Keleseth, along with his brother Valanar and Prince Taldaram from Ahn'kahet, were later raised into undeath yet again by the Lich King to form the Blood Prince Council. Their duty was to avenge themselves on the heroes that slew them and to protect Blood-Queen Lana'thel, the blood-queen of the San'layn. This new position proved to have the same outcome as Keleseth's previous one, and the blood princes were defeated once again.