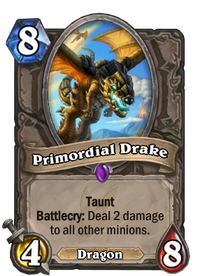 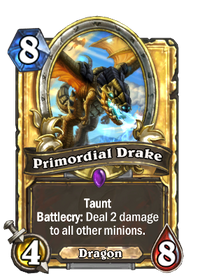 Taunt
Battlecry: Deal 2 damage to all other minions.

Before he became a rap artist.

Primordial Drake is an epic neutral minion card, from the Journey to Un'Goro set.

Primordial Drake can be obtained through Journey to Un'Goro card packs, or through crafting.

A strong but expensive play, combining a decent Taunt minion with a board-clear Battlecry. The Primordial Drake fits well into control-type and Dragon-themed decks, where damaging your own board will not matter as much.

The Primordial Drake is a perfect late-game minion for the Warrior Quest Fire Plume's Heart; as an added bonus, it can be pulled with The Curator. It also has excellent synergy with the spell Sleep with the Fishes, dealing 5 damage to all other minions.

The vrykul frequently use proto-dragons as flying mounts in the Howling Fjord and other parts of Northrend, and could be seen doing so in their constant siege of Valgarde. Wild proto-drakes can be seen in areas such as Storm Peaks and Sholazar Basin. Bronze proto-drakes were used as mounts by the Argent Crusade in Icecrown after they were discovered in the Bronze Dragonshrine by the bronze dragonflight. The Time-Lost Proto Drake is famous for being extremely hard to catch.