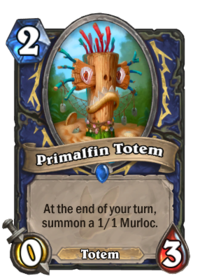 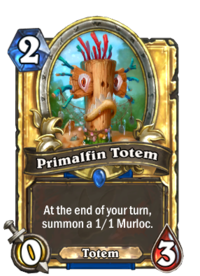 Emits a sound only murlocs can hear, which is good because it’s REALLY annoying.

Primalfin Totem is a rare shaman minion card, from the Journey to Un'Goro set.

Primalfin Totem can be obtained through Journey to Un'Goro card packs, or through crafting. 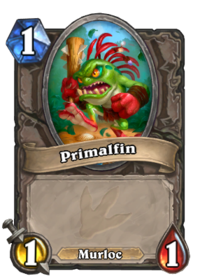 Primalfin Totem is a great addition to a Murloc deck. The effect can be compared to Moroes, but the minion it summons also benefits from Murloc synergy and counts towards Unite the Murlocs. Your opponent will want to remove this as soon as possible, so consider playing it behind a Stoneclaw Totem or other Taunt. It's a good idea to play this card in a situation where the Murloc will generate some synergy, such as when you have a Murloc Tidecaller.