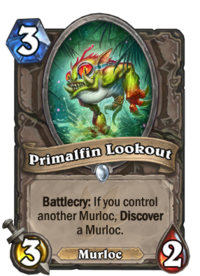 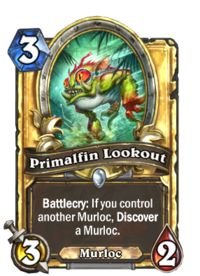 Battlecry: If you control another Murloc, Discover a Murloc.

Lookout is a self-appointed title that's mostly an excuse to beat things up.

Primalfin Lookout is a common neutral minion card, from the Journey to Un'Goro set.

Primalfin Lookout can be obtained through Journey to Un'Goro card packs bought through the ingame Shop, purchased online from the Battle.net shop, or through crafting.

This minion can be included in decks built around Murloc synergy. Since most murloc cards have a low mana cost, these decks tend to run out of cards quickly. The discover effect of this card compensates for that by adding a new card to the hand, and the new card is guaranteed to have synergies with other Murlocs. In a Murloc deck, that benefit can offset the low stats that this minion offers for its mana cost. It can be very useful for pulling out extra copies of some major cards such as Murloc Warleader and Finja, the Flying Star.