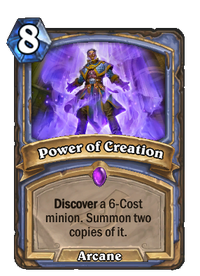 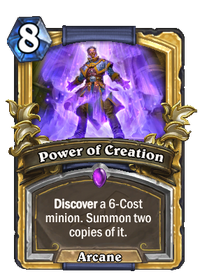 Discover a 6-Cost minion. Summon two copies of it.

Mostly used for party tricks, to be honest.

Power of Creation is an epic mage spell card, from the Rise of Shadows set.

When selecting a minion to summon, it would generally be best to select a minion based on stats, Deathrattle or persistent effects. Minions with a powerful Battlecry will be meaningless, as those Battlecries will not trigger. Conversely, a minion with a negative Battlecry but high stats (such as Damaged Stegotron) can often be a strong choice for that same reason.

Before the rotation of Damaged Stegotron into Wild format in the Year of the Phoenix, it was the most popular pick when offered, providing two 5/12 Taunts without the detrimental self-damaging Battlecry.

Other solid choices remaining in Standard include:

The below table lists all 6-cost collectible minions in Standard format available for Mage to Discover, representing the range of possible minions summoned by Power of Creation.