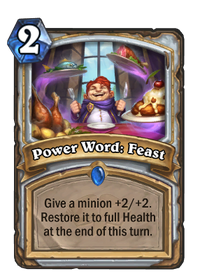 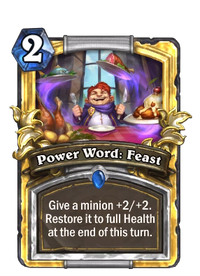 Give a minion +2/+2. Restore it to full Health at the end of this turn.

Power Word: Feast is a strong tempo-generating buff, providing a good amount of stats and the healing it gives becomes more valuable the bigger trades you make. It's always better to play this on a minion that can attack on the same turn as a result.

Power Words (often abbreviated PW: <ability>) are special Holy abilities used by Priests to protect and strengthen allies. There are two other types of Words: the Holy Word and the Shadow Word.

Power Word: Feast is unique to Hearthstone. The artwork depicts Priest of the Feast's son.[1]