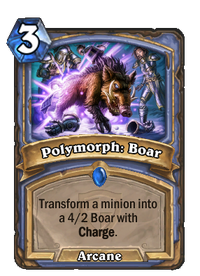 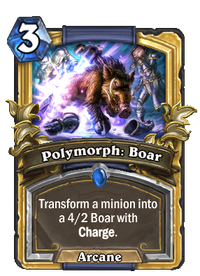 Transform a minion into a 4/2 Boar with Charge.

Polymorph: Boar is a rare mage spell card, from the Grand Tournament set.

Polymorph: Boar can be obtained through The Grand Tournament card packs, or through crafting. 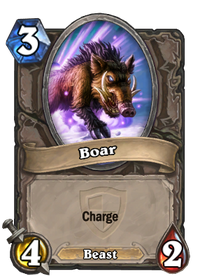 Polymorph: Boar can be used both offensively or defensively

For offensively, it can be used as both burst damage or enemy minion removal (with the drawback of needing 2 more damage to fully remove it), making it a versatile control spell. It's best used on low statted minions which effectively upgrades them into 4/2 with charge.

For defensively, it's basically a Polymorph, removing a high threat enemy minion, costing one less mana but having 3 more attack and 1 extra health then its counterpart. However unless your Fireblast is upgraded, your hero power is unable to clear the boar and requires other minions or spells to clear it.

In World of Warcraft, there are several ways for a Mage to modify their Polymorph to not transform the target into a sheep, but into another animal altogether, such as a porcupine, black cat, monkey or pig. Polymorph: Boar, however, is unique to Hearthstone. Furthermore, in World of Warcraft the different animals are just visually different and do not grant any abilities or altered stats, unlike the Hearthstone version's granting Charge and bonus Attack and Health.

The flavor text "It's always Huffer" refers to the "Always Huffer" meme, describing the apparent ability of Hunters (Face Hunters in particular) to summon Huffer from Animal Companion whenever it is the most unfortunate result for the opponent. While Polymorph: Boar results in a different minion, it has identical stats to Huffer.