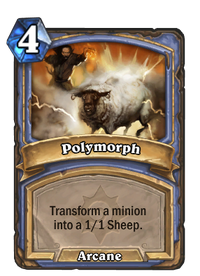 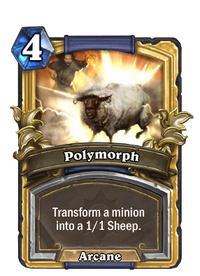 Transform a minion into a 1/1 Sheep.

There was going to be a pun in this flavor text, but it just came out baa-d.

Polymorph is a mage spell card, from the Basic set. It transforms a target minion into a 1/1 Sheep.

Two copies of Polymorph are automatically included in all players' collections upon unlocking the mage class.

Two Golden copies of Polymorph are a reward for raising a mage to levels 47 and 48.

Polymorph is uncraftable and cannot be crafted or disenchanted. 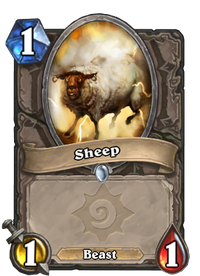 Polymorph is a powerful spell, especially considering the mage Hero Power allows the player to deal 1 damage to any target once per turn. This essentially allows a mage to destroy any targetable minion in play if they have a Polymorph spell and 6 mana to spare, making it one of the most powerful removal options in the game.

Polymorph's transform effect has several advantages over damaging and destroy effects. Because Polymorph transforms the target rather than destroying it, it will not activate the target's Deathrattle (if any), making it useful for countering threats like Tirion Fordring, Deathwing, Dragonlord and Sylvanas Windrunner. It also bypasses Divine Shield, although mages can remove this easily with Fireblast, and because it transforms the target rather than killing it, can prevent the opponent from countering with cards like Resurrect or Kel'Thuzad. Polymorph can counter minions of any size, providing a single-card answer to even a Deathwing or The Ancient One, something even Pyroblast cannot do.

While the Sheep produced is weak, its usefulness should not be underestimated. Even a 1/1 Sheep can serve as a target for Blessing of Kings or Mark of Nature, or provide the extra point of damage needed destroy one of your weakened minions on a later turn. Hunters can make good use of Sheep as targets for Beast-synergy cards like Houndmaster or Ram Wrangler, or to activate Scavenging Hyena or Kill Command. For this reason it is always best to remove the Sheep if possible, especially if facing a hunter.

Despite its power, Polymorph is best suited to decks seeking to counter large threats. Its cost makes it inefficient for dealing with smaller minions, while its transform effect means a lack of versatility compared to damage-dealing cards like Fireball, which can be directed at either minions or the enemy hero. However, it is one of the best answers in the game to late game threats, making it a useful addition for control decks.

Polymorph was first seen in Warcraft II as a mage spell which alters the physical form of its target. This turns any living creature into the critter for that map type such as Pig for Wasteland, Seal for Snow, Sheep for Forest, Boar for Swamp. Although the unit hasn't been killed it has been in effect killed as it cannot be turned back into the previous unit or commanded in any way.

In World of Warcraft, Polymorph is a mage crowd control spell which transforms the target into a harmless sheep. The spell has a number of differences from its incarnation in Hearthstone. Firstly, the effect is only temporary, lasting for up to 50 seconds against NPCs, or 8 seconds against players, and only one target can be polymorphed at a time. It is also broken by any damage taken by the target, and while the target is 'sheeped', quickly regenerates their health, swiftly negating any damage taken by the target before that point. Polymorphed targets are also unable to control their character in any way for the duration. These limitations make Polymorph great for crowd control - taking an additional target out of play while another is focused upon - but undesirable for use upon an active target.

While the sheep is the default form for Polymorph, various modifications exist to allow the mage to select other animals as the target form. Examples include rabbits, black cats, pigs, porcupines, bear cubs, penguins and more. When used upon critters, Glyph of Crittermorph increases the spell's duration to 24 hours and allows it to be used on multiple targets, allowing mages to transform whole zones full of critters into a variety of unlikely animals. Lakes full of aquatic bear cubs, and skies full of floating pigs, are just some of the possible uses of this glyph.

Mages have had Polymorph since the beginning of WoW. Originally, it was the most powered form of CC (crowd control), but has since been balanced by an abundance of CC by every class in modern WoW PvP. Before the addition of diminishing returns, mages were able to keep enemy NPCs and player characters polymorphed indefinitely.