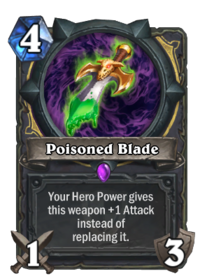 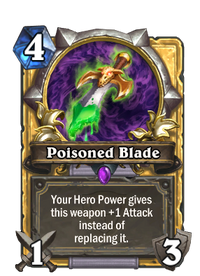 Your Hero Power gives this weapon +1 Attack instead of replacing it.

Poisoned Blade is an epic rogue weapon card, from the Grand Tournament set.

Poisoned Blade can be obtained through The Grand Tournament card packs, or through crafting.

Example: Suppose a priest has obtained Poisoned Blade through Mind Vision and has equipped it. When he uses his Hero Power Lesser Heal, its target will be healed for 2 and Poisoned Blade will gain +1 Attack.[1]

A very slow weapon, Poisoned Blade needs a high mana investment over several turns to gain value. Paying 2 Mana for 1 Attack is hardly worth the cost, and it requires you to hold off on attacking with it if you want to boost its damage further. If you Hero Power and swing on curve, this weapon provides 6 damage for 8 mana, well below almost every other weapon.

If you can get a different Hero Power from something like Sir Finley Mrrgglton it lets you use the Hero Power while giving the weapon +1 Attack. This however does not fix the weapon's inefficiency, as most Hero Powers are not cost-efficient compared to cards with similar effects.

See Self-Sharpening Sword for a comparable weapon that is much better at scaling.

This weapon's modification of Dagger Mastery resembles a version of that Hero Power seen during the game's alpha, which allowed players with a weapon already equipped to instead opt to grant that weapon a permanent +1 Attack. This was used in an infamous combo with since removed card Envenom, allowing players to one-shot the enemy hero. However, while similar, Poisoned Blade lacks that combo's burst potential, due primarily to the absence of Envenom, as well as the requirement of additional cards and mana expenditure. 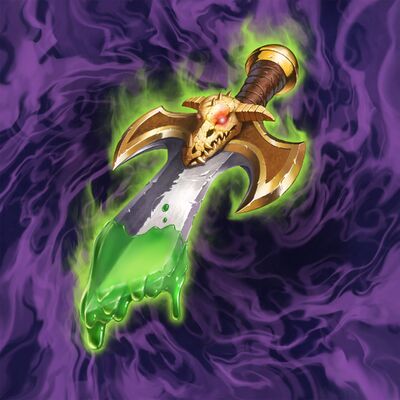