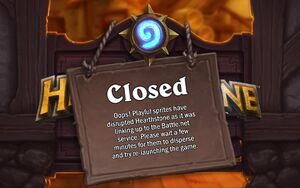 The playful sprites in action

Little is known of these elusive creatures aside from their habit of interrupting Hearthstone games, often at critical moments. They appear to be well-known to the developers, who apparently favour the bazooka as the tool of choice for eliminating these troublesome critters. [1]

However, the frequency of the sprites' playful interactions with the Hearthstone servers may make them easy scapegoats, when the real cause of the problems lies elsewhere. On one occasion the true culprit was revealed by a fearless adventurer to be none other than Community Manager Lore, who had been nibbling on some critical wires.[2]

Pesky sprites are also blamed for miscellaneous errors experienced by iPad players who have not yet upgraded to the latest patch.[3] If sprites are also to blame for other bugs found in-game, and since patches often eliminate these bugs, it is possible that the patching process itself represents a kind of ongoing battle against the sprites, in which case the prolonged periods of server malfunction following the administration of many patches may in fact reflect a kind of counter-strike by the sprites. However, since each patch seems to bring its own new bugs (sometimes more than were removed) it is possible these noble efforts to bolster the servers are being used as trojan horses by the pesky sprites to sneak even more of their numbers inside.

However, it seems more likely the playful sprites are simply living up to their name, and enjoy interrupting 11:0 arena runs out of sheer boredom.

Playful sprites may be related to the sprites of Pandaria.