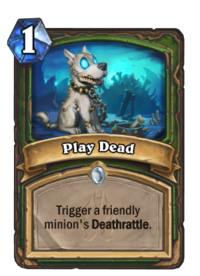 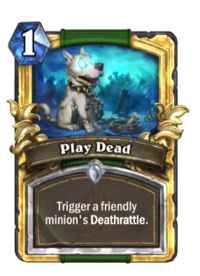 Play Dead is a common hunter spell card, from the Knights of the Frozen Throne set.

Play Dead can be obtained through Knights of the Frozen Throne card packs, or through crafting.

This spell is essentially a cheaper Feign Death and Terrorscale Stalker that works well in a general Deathrattle-themed deck, and in combination with minions with powerful Deathrattles. While the effect is single-target only unlike Feign Death, having a lower mana cost gives it more flexibility, as well being easier to use. Any high-cost, powerful tempo-generating Deathrattle effects like Sylvanas Windrunner, Carnivorous Cube, or Sneed's Old Shredder benefit strongly.

In World of Warcraft, Play Dead is a hunter ability granted by the Pet Training Manual: Play Dead tome. It allows the hunter to command their pet to perform their own version of Feign Death, tricking enemies into ignoring them for up to 6 minutes.