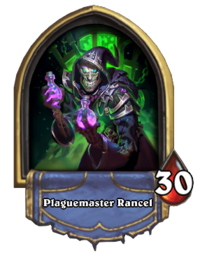 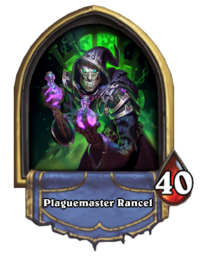 Dying to his touch is terrible. Living is even worse.

Plaguemaster Rancel is a boss that can be encountered during the Monster Hunt. 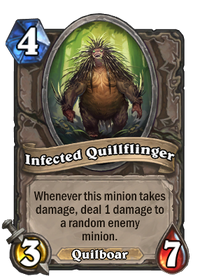 Having a special card called Infected Quillflinger. You can use it to activate your enrage minions.

With your cards, destroy his minions but don't place to many. Survive the DOOM! and split between going face and killing his minions while building a board.

Start dropping minions immediately. You will need board control to win. Also, try not to overcommit in dropping minions since he has several board wipes. It is key that you prevent him from having a board, so that you can neutralize his hero power.

Don't simply go face, use your minions to defeat his minions until you have a board.

Plaguemaster Rancel
Do you know how difficult it is to MAKE a plague?

Plaguemaster Rancel
A step ahead of me.
Could I borrow that? Just for a moment.
I like the way you think.
Oh, poison!

Plaguemaster Rancel
You lasted so long! This will be a good case study.