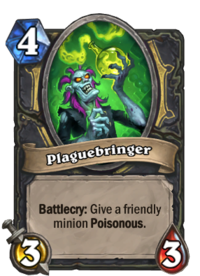 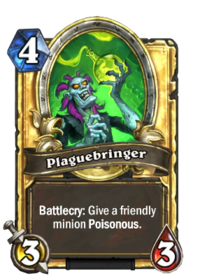 Battlecry: Give a friendly minion Poisonous.

One sip and you've got the grippe.

For the boss Hero Power of the same name, see Plaguebringer (Hero Power).

Plaguebringer is a rogue minion card, from the Basic set.

Two copies of Plaguebringer are a reward for raising a rogue to level 8.

Two Golden copies of Plaguebringer are a reward for raising a rogue to levels 23 and 26.

The best use for Plaguebringer is proactively granting Poisonous to a token minion which can attack immediately, such as Stonetusk Boar, or has Divine Shield, such as Argent Squire. This will let you trade up with an enemy and summon a 3/3 as well. Certain minions with triggered effects, such as Knife Juggler or Wild Pyromancer, may also benefit from Poisonous, while the others, such as Imp Master, are bad targets.

Plaguebringer can also be played on a minion while you're ahead, threatening your opponent if they want to play a large minion. This works especially well on Stealth minions such as Jungle Panther, protecting it from minion attacks and single-target removal.

Note that you can't combo Plaguebringer with Betrayal since only friendly minions can be targeted.

Plaguebringers tend to be slightly more practical than the average apothecary. They deal with the logistics of deploying the plague. They are affiliated with the Royal Apothecary Society of the Forsaken and the Cult of the Damned of the Scourge.