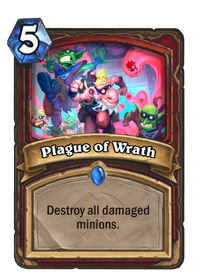 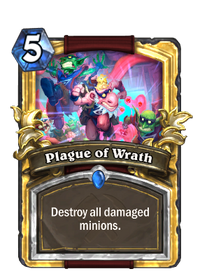 Plague of Wrath is a rare warrior spell card, from the Saviors of Uldum set.

Following up a Whirlwind (or similar effect, such as Blood Razor or Ravaging Ghoul), Plague of Wrath can effectively clear any board. It's also useful after combat where your opponent has minions left over.

It is usually more worth it to use Brawl or Execute. Brawl has the downside of leaving 1 minion, but doesn't need to combo with anything, whilst Execute can take care of a single most important minion.