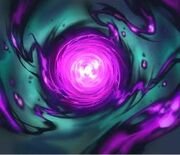 The Plague of Undeath as it was represented in-game.

This is a lore page. For the card's in-game appearance, see The Final Plague?!

The Plague of Undeath is a powerful curse that was contained in the tombs of Uldum, alongside the plagues of Murlocs, Madness, Death, Wrath, and Flames. It is capable of resurrecting "that which was long dead", easily resurrecting beings even The Lich King struggled to raise. It was unleashed by Rafaam and Dark Pharaoh Tekahn, ostensibly to help Tekahn rule over Uldum. However, Rafaam truly only wanted the final plague to resurrect Galakrond.

The plague was first used by Tekahn in a desperate attack as The Final Plague?!, summoning C'Thun, N'Zoth, the Corruptor, Y'Shaarj, Rage Unbound, and Yogg-Saron, Hope's End. While this did not save Tekahn, it did give Rafaam enough time to escape to Dragonblight with the plague.

After defeating the Dragonflights, the plague was used by Rafaam in a ritual to Summon Galakrond.