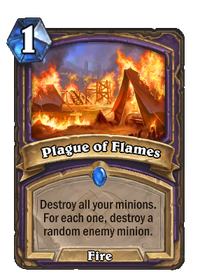 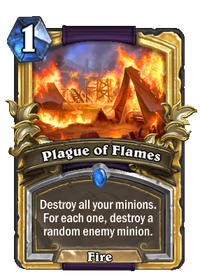 Destroy all your minions. For each one, destroy a random enemy minion.

Plague of Flames is a rare warlock spell card, from the Saviors of Uldum set.

Plague of Flames is similar to Unwilling Sacrifice, but has a wider-scale effect. It can serve as a removal spell to eliminate several enemy minions, but at the cost of sacrificing all of your own. The spell is more effective when you have just as many or more minions as your opponent, which can be achieved by token summoners like Fiendish Circle, Rafaam's Scheme or Voidlord's Deathrattle. Bloodreaver Gul'dan is able to benefit from this card, as you can fill your board with Demons before destroying them all Plague of Flames, then using Bloodreaver Gul'dan to resurrect them en masse.