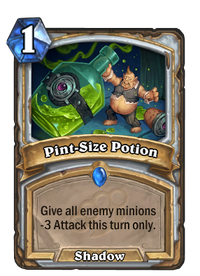 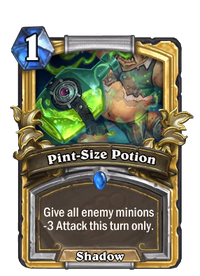 Give all enemy minions -3 Attack this turn only.

I hope you didn't disenchant your Shadow Word: Horror!

Pint-Size Potion is a rare priest spell card, from the Mean Streets of Gadgetzan set.

Pint-Size Potion can be obtained through Mean Streets of Gadgetzan card packs, or through crafting.

When overwhelmed by many minions, a priest can use this card in combination with Shadow Word: Horror or Confuse for a potent board clear. This also synergizes with cards like Shadow Word: Pain, Stampeding Kodo, and Book Wyrm to remove cards that are normally outside of their target range; with cards like Cabal Shadow Priest, Potion of Madness, and Shadow Madness to steal cards that otherwise would have a too high Attack value; or with cards like Crazed Alchemist and Kooky Chemist to permanently reduce the stats of an opposing minion.