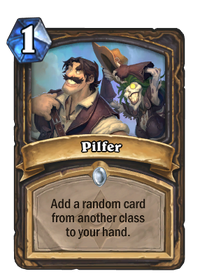 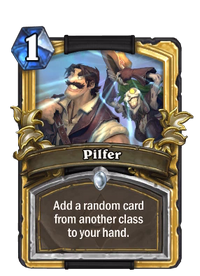 Add a random card from another class to your hand.

The class is always greener on the other side of the board.

Pilfer is a common rogue spell card, from the Classic set.

Pilfer can be obtained through Classic card packs, through crafting, or as an Arena reward.

A weaker version of Hallucination that replaces itself with a random card. While undesirable for most decks, the effect can be strong included with other cards that synergize with non-Rogue cards like Underbelly Fence, Vendetta, Spectral Cutlass, and Tess Greymane. In particular, this card works very well with Underbelly Fence to activate its effect on turn 2.

Like all one-mana cards, Pilfer is good spell to trigger Combo effects like Eviscerate, and helpfully maintains card advantage while doing so.