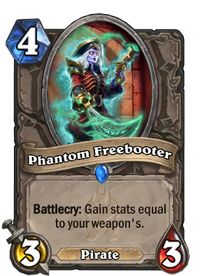 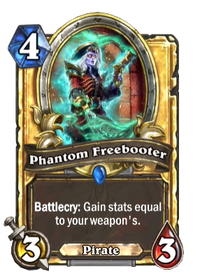 There's no such thing as a free boot.

Phantom Freebooter is a rare neutral minion card, from the Knights of the Frozen Throne set.

Phantom Freebooter can be obtained through Knights of the Frozen Throne card packs, or through crafting.

Phantom Freebooter is a strong Pirate minion that can gain a significant amount of stats if you have a weapon equipped. Due to weapons typically having much more Attack than Durability, the Battlecry mostly boosts the Attack of the minion, causing it's effect to look similar to Bloodsail Raider's. Phantom Freebooter competes directly with Naga Corsair as a 4-drop pirate, and while it will often be a larger minion for the same cost, Naga Corsair's effect is faster, as it adds attack to your weapon immediately. It should also be considered that without a weapon in play, Phantom Freebooter is a paltry 3/3 minion for 4 mana, significantly weaker than Naga Corsair, which can be played with no weapon equipped and still have a very powerful aggressive statline.

This card's flavor text is likely a reference to the common phrase "There is no such a thing as a free lunch".