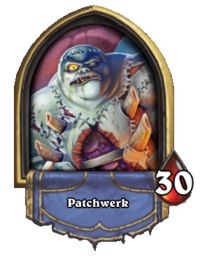 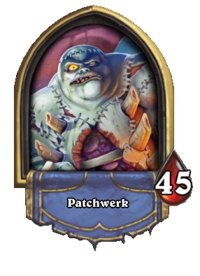 The massive abomination is Kel’Thuzad’s unstoppable avatar of war.

Patchwerk is a boss found in the Curse of Naxxramas adventure. He is the first boss in the adventure's fourth wing, the Construct Quarter. 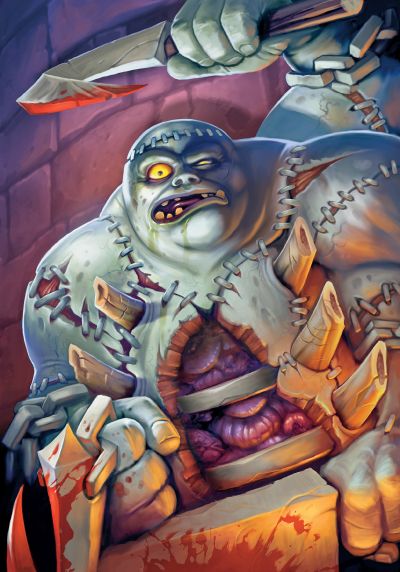 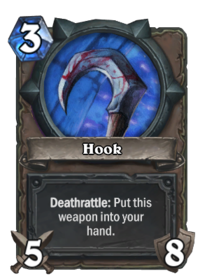 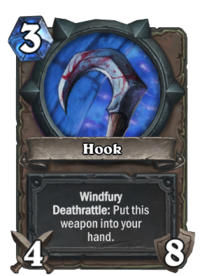 Unlike the other bosses in Curse of Naxxramas, Patchwerk has no cards in his deck. He also does not draw cards each turn. However, he is still subject to fatigue damage if forced to draw cards.

The only card that Patchwerk has is the single weapon that is pre-equipped at the start of the battle.

With the release of Kobold Stickyfinger in Descent of Dragons, the encounter is simplified massively. Stealing Patchwerk's weapon will nullify all damage he can deal. The only contingency is that you have to survive until you can draw and play the card - Heroic Patchwerk will kill you long before that point unless the rest of your deck is properly defensive. Warrior or Rogue are best for this, since they can use Ancharrr and Raiding Party respectively to draw Stickyfinger.

Following the release of Goblins vs Gnomes, Patchwerk is rendered a trivial encounter by the introduction of Jeeves. With no cards in his hand and no cards in his deck, Jeeves' end of turn effect will cause Patchwerk to rapidly suffer large amounts of Fatigue damage, by making him attempt to draw 3 cards. As a result, the main strategy with a Jeeves deck is to ensure that Jeeves is not removed before he can destroy Patchwerk. Jeeves' effect will deal 6 damage the first turn, 15 the second, and 24 the third.

The two most effective ways to win against Patchwerk are decks with minions that force him to draw (e.g. Coldlight Oracle) and decks that prevent him from hitting you. The heroic strategy listed here describes a deck that does both.

This partial decklist is a low-budget Freeze Mage concept. Fill it with similar cards from whatever you have available.

Include the maximum amount of the following cards in this deck: Ice Lance, Mirror Image, Frostbolt, Acidic Swamp Ooze, at least one pair of Sunfury Protector or Defender of Argus, Youthful Brewmaster, Coldlight Oracle, Dancing Swords.

The battle is a race where good luck merely slows Patchwerk's damage output. The Hook cannot be stopped -- unless by some non-Miracle (rogue) you fill Patch's hand with Bananas, but that's crazy, right? It's safer to rely on a first-turn Acidic Swamp Ooze or a Taunt-buffed pair of Molten Giants.

There's only one target for Ice Lance and Frostbolt: Patchwerk's face. Chill him out whenever possible while flooding the board with Taunt and Secrets. Given how little time you have to do anything before Hateful Strike is used (every Turn Four Plus except when the Hook is being re-cast), it'll be key to flesh out the remainder of the deck with cost-reduction and two-for-ones.

Towards this goal, consider using Mad Scientist or Kirin Tor Mage with Ice Barrier or Ice Block. Duplicate and Arcane Intellect will keep your options flowing, while Sorcerer's Apprentice makes these easier to cast. A Pint-Sized Summoner also helps to drop dudes fast, but there are many other cards competing for deck space, so sideline this one unless you lack the rares and epics.

If a Summoner is a realistic inclusion, Water Elemental may be able to buy you an extra turn. Unfortunately, a Turn Four elemental is likely to be Stricken unless you have a Mirror Image remaining.

The most abundant source of damage on your side may come from 'milling'. If all Duplicates, Youthful Brewmasters, Coldlight Oracles, and Dancing Swords trigger, a total of (1 + ( 2 + 2 + 2 + 2 + 1) * 2) * (18 / 2) = 315 Fatigue damage is possible. Though it is unlikely that you -- or Patchwerk -- will survive to reach those optimal conditions, ten or fifteen damage happens reliably often.

If one manages to play both a Water Elemental and a minion with Taunt, Patchwerk will always destroy the taunt minion, allowing the player to freeze him every turn they have a new taunt minion available. 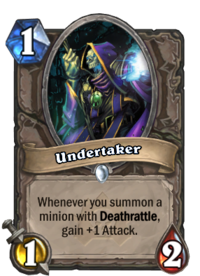 Kel'Thuzad
Patchwerk is sewn together from adventurers who couldn't defeat Lorewalker Cho.

Patchwerk
What happened to... Patch... aaaahrr...
Kel'Thuzad
My avatar of war! I should have sewn him together from better players...

Patchwerk is one of Kel'Thuzad’s most powerful abominations—his strength and speed come as a shock to those that may face him in combat. Far from a sluggish, mindless undead, Patchwerk uses his immense power to pulverize any tiny meat thing that may face him with a flurry of potent, powerful attacks. He just wants to play![1]

"Behold, Patchwerk. When word of his existence first reached the ears of the Brotherhood, none believed the tales of an abomination with such immense speed and strength. Fewer still believed it when he fell the first time…"
- Commander Eligor Dawnbringer

Patchwerk was originally intended to be a collectible reward from the Curse of Naxxramas adventure. His original design was as a 10 Mana 14/14 minion.[2]