For the minion card of the same name, see Patches the Pirate.

Patches the Pirate is a hero that the player can pick in the Battlegrounds game mode. 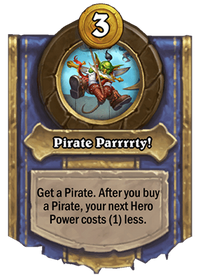 Patches' Hero Power is a steady value generator, giving him extra Pirates to play with and allowing him to get a discount on minions or gain a profit when discounted to 0. His Hero Power lets him build up a Pirate board early (as long as you roll Pirates) and give him a better chance at finding triples, and if Patches goes late game with Pirates, he'll be able to activate his Hero Power more often, thanks to Cap'n Hoggarr adding more gold to the pool. However, like all tribe-specific heroes, don't feel obligated to stick to Pirates if the situation does not favor it.

Always buy Freedealing Gambler when it shows up since Patches can just sell the minion back for no gold loss, even if you choose to not go Pirates.