From Hearthstone Wiki
(Redirected from Patch)
Jump to: navigation, search

For the minion card, see Patches the Pirate.

Updates to Hearthstone are made in the form of patches. This page lists all Hearthstone patches to date.

New patches for Hearthstone are released regularly, fixing bugs and adding new cards, card backs and game features. Patches for desktop clients are downloaded automatically from the Battle.net launcher prior to launching the game, and players are required to update to each new patch in order to launch Hearthstone.

The League of Explorers[edit | edit source] 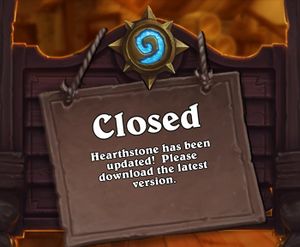 The innkeeper likes his patrons up to date

Each patch represents a different version of Hearthstone, incompatible with previous versions. Because of this, players using different patches cannot be matched against each other, in order to avoid version conflict and missing data during matches. This usually only happens due to using different platforms, or because a player has not logged out and updated since the new patch has been released.

While players are required to update to the latest patch as soon as it is released on their current platform, because patches are released at different times for different platforms, it is possible to update one device to a new patch while the other is not yet able to update. Once an account has been updated to a new patch, the player will not be able to access the account on any device that has not yet updated to that patch, effectively locking out all other platforms until that patch is also released for them.

Use of older versions appears to only be permitted during the rollout period, while the patch is being rolled out to each platform in turn. Once all platforms have access to the latest patch, clients with the older version will be prevented from playing until they have updated to the latest version.[2]

The complexity of releasing on multiple platforms can cause delays to the release of patches.[3] Designer Dean Ayala explains, "In order to patch simultaneously on PC/Mobile there are a number of things that have to be submit and approved being we can release a new patch to the public," with the result that card changes are often postponed until the new patch is ready for all platforms.[3]

Each patch's version number charts its position in the game's history. Currently, the first part of the number is changed for each major release (expansion or adventure). From Blackrock Mountain to The League of Explorers the second part was changed with each patch, reseting to 0 at the start of each new release, but Whispers of the Old Gods has seen the second digit increased more erratically. The third digit was unused until Whispers of the Old Gods, but seems to reflect smaller progressions. The remaining digits are increased at a more erratic pace, likely reflecting revisions to in-house builds not released to the public. These digits do not increase the first three parts of the version number, and are essentially superfluous. Colloquially, patches are often referred to by the first two sections, such as "Patch 3.2". Note that these rules are not always followed; some patches fail to increase numbers, or increase numbers without including appropriate changes.

The system used until Whispers of the Old Gods was similar to that used in games like World of Warcraft, although without the division between major and minor patches, without the use of the third part of the number, and with additional digits. In comparison, "Patch 4.1.0.10956" would likely be titled "Patch 4.0.1".

Prior to the adoption of a standardised format with Blackrock Mountain neither the first nor second parts of the number were regularly increased. The game's version numbers initially began with 1.0.0. This was changed to 1.1.0 after the release of Curse of Naxxramas, and again to 1.2.0 with Patch 1.2.0.6485. The first digit was raised from 1 to 2 with the pre-patch for the game's first expansion, Goblins vs Gnomes, but was not increased to 3 until the game's second expansion, The Grand Tournament. In September 2014 Yong Woo had stated that the developers were still "tuning" their version number process.[4] After setting a consistent patch number trend with earlier content, Whispers of the Old Gods saw sparse and erratic increases to patch numbers, entirely breaking the established pattern. The expansion's Patch 5.2.2.13807 also saw the third digit increased for the first time, previously never having had any value other than 0.