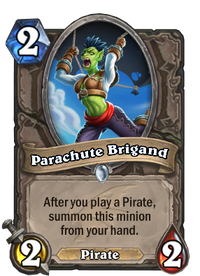 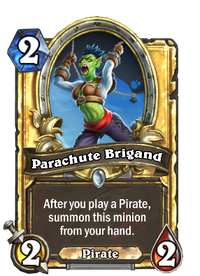 After you play a Pirate, summon this minion from your hand.

Parachute Brigand is a common neutral minion card, from the Descent of Dragons set.

Parachute Brigand can be obtained through Descent of Dragons card packs, through crafting, or as an Arena reward.

A similar effect to Patches the Pirate, but it is summoned whenever is in your hand. Parachute Brigand is both better than Patches because it has much better stats and you can use two of them, while worse because it needs to be drawn before it is summoned for free.

Parachute Brigand has powerful early game potential with 1 mana cost Pirate cards such as Bloodsail Flybooter, Sky Raider, N'Zoth's First Mate, Southsea Deckhand, and Small-Time Buccaneer, which can provide a lot of board presence and damage early in the game.

Since it is summoned directly, it synergizes with Ship's Cannon and Skybarge really well.

If you have Parachute Brigand and Skybarge in your hand, it might be a good idea to hold off playing any pirates until Skybarg is on the field, guaranteeing at least two triggers from the effect. This is most easily done if you also have The Coin.

A 2 mana 2/2 Pirate is an okay play by itself if you have nothing else on turn two, especially if you can curve into something like Ancharrr or Southsea Captain.