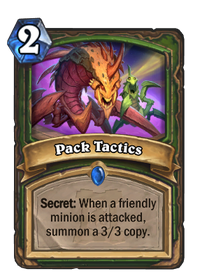 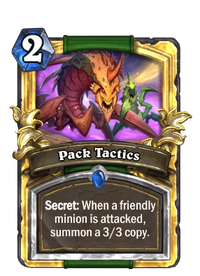 Secret: When a friendly minion is attacked, summon a 3/3 copy.

Pack Tactics is a rare hunter spell card, from the Ashes of Outland set.

At its most basic, Pack Tactics is similar to Venomstrike Trap. When one of your minions is attacked, you summon the equivalent of a 3 mana minion. However, the Secret is most powerful when you can make use of the copying effect. In particular, Deathrattle minions are excellent to copy, putting decent stats and a strong effect into play. Good targets include Augmented Porcupine, Zixor, Apex Predator, and Savannah Highmane. Taunt minions are also good targets, and very easy to force copies on. The baseline is an Ironfur Grizzly, making this a more easily triggered Bear Trap.

Pack Tactics can also be used to protect strong triggered or aura effects. For example, your opponent will want to destroy your Tundra Rhino. Pack Tactics can summon a 3/3 copy, which your opponent might not be able to deal with immediately. Priority triggered effects like Scavenging Hyena and Secretkeeper can be copied and also given a stat boost.

Try not to play Pack Tactics while you control token minions. While the 3/3 it summons is still useful, it does waste a lot of the potential value of this card.