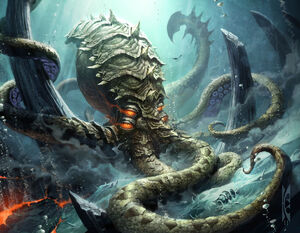 Ozumat was a minion card in the game's alpha.

The card was cited by Ben Brode as an example of a card which was designed specifically in order to use the "awesome" associated art. However, ultimately the developers "just couldn’t fit him into the game."[1]

The card was removed from the game shortly before the beginning of the beta, with its design becoming Deathwing.[2]

Ozumat is the patriarch of all Kraken. It appears to be in the service of the Old Gods' forces, fighting alongside the naga and Faceless Ones during Final Judgement and Defending the Rift. It is the final boss of the Throne of the Tides in World of Warcraft: Cataclysm and makes several appearances during the Vashj'ir storyline.

"Tales of the monstrous kraken that terrorize Azeroth's high seas were once relegated to myth... but no longer. By some ill means, the naga have bent Ozumat - the patriarch of all kraken - to their will and unleashed him against Neptulon and his followers."