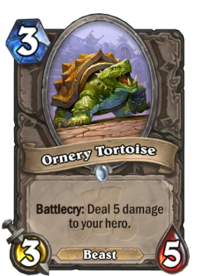 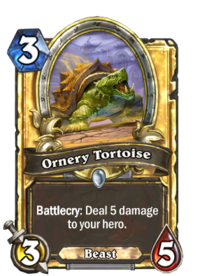 Ornery Tortoise is a common neutral minion card, from the Rastakhan's Rumble set.

Ornery Tortoise is straightforward, with above-average stats with a significant downside. This card is best played where the health penalty matters the least, which is the most true for aggressive decks which aim to rush down the opponent. Hunter and Druid players can use the Beast tag to their advantage, whereas Warlock players can use it to power self-damaging cards such as Floating Watcher and Lesser Amethyst Spellstone.

The flavor text is a reference to Teenage Mutant Ninja Turtles, who love pizza.