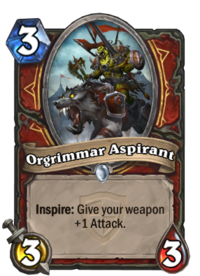 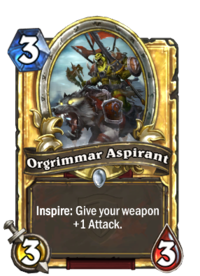 Inspire: Give your weapon +1 Attack.

"Four out of three orcs struggle with math." - Angry Zurge

Orgrimmar Aspirant is a common warrior minion card, from the Grand Tournament set.

Orgrimmar Aspirant can be obtained through The Grand Tournament card packs purchased online from the Battle.net shop, or through crafting.

Other then standard inspire synergy (Maiden of the Lake, Fencing Coach, ect) this card can work well with Gorehowl allowing you to keep it indefinitely as long as this card is on the field.

This minion is an Aspirant representing Orgrimmar, the capital of the orcs.

Orgrimmar is the capital city of the orcs, and the Horde as a whole. Found at the northern edge of Durotar, the imposing city was once home to Warchief Vol'jin, as well as several of those who held the title before him. As with all capital cities, it has banks, class and profession trainers and auction houses.

Named in honor of the legendary Orgrim Doomhammer, Orgrimmar was founded as the capital city of the orcs' new homeland. Built within a huge, winding canyon in the harsh land of Durotar, Orgrimmar stands as one of the mightiest warrior cities in the world. Behind Orgrimmar's immense walls, elderly shaman pass their knowledge on to the Horde's newest generation of leaders, while warriors spar in the gladiatorial arena, honing their skills in preparation for the trials that await them in this dangerous land.

Today, Orgrimmar lies at the base of a mountain between Durotar and Azshara. A warrior city indeed, it is home to countless amounts of orcs, trolls, tauren, and an increasing amount of Forsaken are now joining the city, as well as the blood elves and Bilgewater Cartel goblins who have more recently been accepted into the Horde. 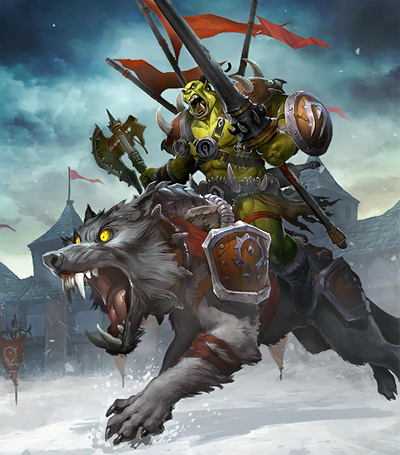