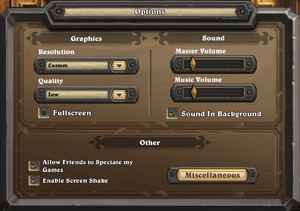 The Options menu is a sub-screen opened through clicking the 'Options' button from the Game Menu, accessed through the cog-wheel icon in the bottom-right corner of the screen, and available at any time. It allows players to adjust settings for graphics, sound and the Players Near Me feature, as well as to view the credits and the original Hearthstone cinematic.

The Miscellaneous section is removed from the menu during play, and while in certain menu screens, such as the Solo Adventures screen.

The Graphics section allows players to adjust the resolution and graphics quality of the game's display, and toggle windowed and fullscreen mode.

The Sound section allows players to adjust the master and music volume for the game, as well as choosing whether to have sounds played when the game is running in the background.

The Preferences section has two options:

The miscellaneous section allows players to watch the credits, or the game's original cinematic intro.