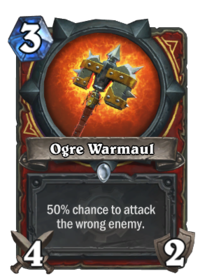 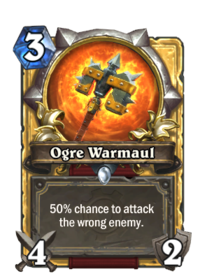 Simple, misguided, and incredibly dangerous. You know, like most things ogre.

Ogre Warmaul is a common warrior weapon card, from the Goblins vs Gnomes set.

Ogre Warmaul can be obtained through Goblins vs Gnomes card packs, or through crafting.

With only the enemy hero as a hostile target, the weapon has a 100% chance to hit them, effectively negating its triggered effect.

Ogre Warmaul has higher attack than any other warrior weapon for its cost, however the Forgetful effect makes it difficult to rely upon for removing enemy minions. It is best used for direct damage to the enemy hero.

This can be useful for removing protected minions, or even for dealing lethal damage to the opponent themselves. For example, with only 1 Taunt minion on the field, attacking the Taunt using the weapon will have a 50% chance of bypassing the Taunt and striking the enemy hero. In close games this chance at extra damage can allow players to close the gap.

Because of this possibility, when seeking to prevent an opponent with the Ogre Warmaul from hitting your hero while behind a taunt, it is effective to summon as many minions onto the field as possible. Each acts to decrease the likelihood of an attack reaching your hero should the weapon's triggered effect activate.

The main significance of this weapon's triggered effect is that with multiple targets available, the player cannot be sure which target will be hit. This makes its use less advisable when there are high-Attack enemy minions on the board (unless they are desirable targets), as hitting them will cause the player a lot of damage. It adds further unpredictability when playing against minions such as Boom Bots. 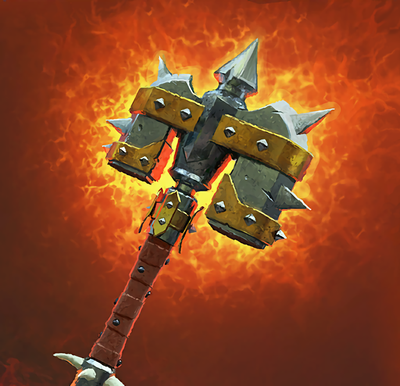