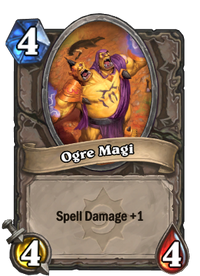 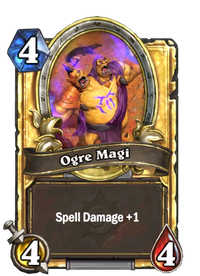 Training Ogres in the art of spellcasting is a questionable decision.

Ogre Magi is a neutral minion card, from the Basic set.

Two copies of Ogre Magi are automatically included in all players' collections upon unlocking the warlock class.

Two Golden copies of Ogre Magi are a reward for raising a warlock to levels 55 and 56.

Ogre Magi is uncraftable and cannot be crafted or disenchanted.

Ogre Magi is mostly used for its Spell Damage, increasing the damage dealt by all spells by 1, and is most valuable in decks focusing on this type of play. However, Ogre Magi is also a fairly sturdy minion, able to withstand and dish out a reasonable amount of damage.

In the spectrum of Spell Damage minions, Ogre Magi is one of the more powerful and expensive options. His sturdy stats make him a useful combat minion in his own right, but his 4 cost can make it more difficult to summon him and play spells in the same turn. Ogre Magi is essentially an improved Dalaran Mage, with the additional 1 mana cost granting an additional 3 points of Attack, while Azure Drake is in turn an improved Ogre Magi, offering card draw for an additional point of mana.

Ogre magi or ogre-mages (singular: ogre-mage or ogre magus) are two-headed ogre spellcasters who are typically larger and more intelligent than their one-headed brethren. While generally considered to have been extremely rare prior to the First War, many two-headed ogres are known to have been born naturally on Draenor, as the Gorian Empire was ruled by a succession of powerful sorcerers. However, many more ogre magi were created during the Second War due to the mystical interventions of Gul'dan, who used the magical energies of the high elven runestone at Caer Darrow to infuse normally dim-witted ogres with extreme cunning and the magical energies of dead warlocks from the Shadow Council. Ogre magi often enjoy an elevated position among the ogre clans.