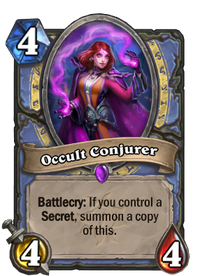 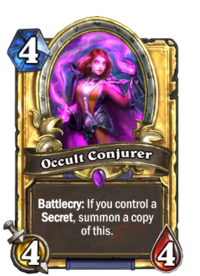 Battlecry: If you control a Secret, summon a copy of this.

Occult Conjurer is an epic mage minion card, from the Madness at the Darkmoon Faire set.

Occult Conjurer provides an effective tempo option for Mage decks built around Secret synergy. Assuming a Secret is played on Turn 3 (or even brought into play by means of Inconspicuous Rider) and hasn't activated, Occult Conjurer provides 8/8 worth of stats split across two bodies that isn't easy to deal with in the early game. If you're planning to play this minion, try to play a Secret that is less likely to activate - for instance, avoid playing Rigged Faire Game against an empty enemy board.

Alternatively, play this minion immediately after a Secret to guarantee her effect triggering. A good idea is to hold onto a 0-cost Secret drawn with Ancient Mysteries, then play it followed by this minion.

Summon
I intend to deceive.
Attack
I see you.