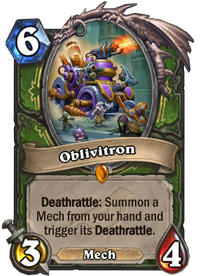 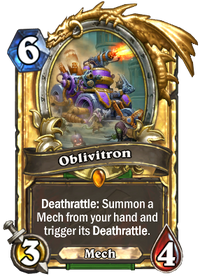 Deathrattle: Summon a Mech from your hand and trigger its Deathrattle.

Oblivitron is a legendary hunter minion card, from the Rise of Shadows set.

Oblivitron can be obtained through Rise of Shadows card packs, through crafting, or as an Arena reward.

While Oblivitron has pitiful stats for its mana cost, its true strength lies in its immensely powerful Deathrattle. You generally want to make sure that any Mechs in your hand when Oblivitron's effect activates are those with powerful Deathrattles; for instance, if your hand contains Mechanical Whelp and Goblin Bomb then Goblin Bomb is what is summoned, that would be rather unfortunate. Excellent minions to pair with Oblivitron are Spider Bomb, which can instantly annihilate a stubborn enemy minion (though this play is less consistent if your opponent controls multiple minions), Safeguard for three layers of Taunt, and Mechanical Whelp, which can provide instant board presence. Other decent choices are Replicating Menace, which can give you some smaller minions on the board, Weaponized Piñata, which will give you an additional Legendary minion, and Kaboom Bot, which can act similarly to Spider Bomb (so long as the minion you hope to destroy has 4 Health or less and doesn't have a Divine Shield). Oblivitron can also pull Mechs without Deathrattle, and minions such as Damaged Stegotron and Bull Dozer can be also valuable.

Note that if Mecha'thun is summoned with Oblivitron's effect, it unfortunately will not destroy the enemy Hero even if you fulfill all other requirements, as there will still be one minion on your field (itself). Even still, though, getting a 10/10 body onto the board for free is nothing to sneeze at, should the situation arise.

Should you somehow end up with multiple copies of Oblivitron, you can have one summon a second, which will then activate its Deathrattle and summon a potential third should you have one in your hand, and so on. This can be supported through Nine Lives, which when played right can add Oblivitron to your hand while activating its effect to summon itself and activate its effect again to summon another Mech in your hand.

Fireworks Tech can trigger Oblivitron's Deathrattle early, while Necromechanic can combo ferociously with Oblivitron, summoning two Mechs from your hand and triggering each of their Deathrattles twice.

Summon
DEAD OR ALIVE.
Attack
YOU'RE COMING WITH ME.

Oblivitron is unique to Hearthstone.