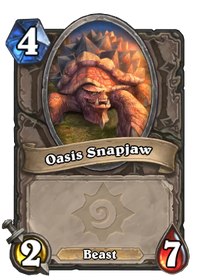 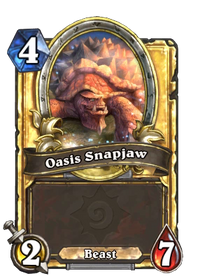 His dreams of flying and breathing fire like his idol will never be realized.

Oasis Snapjaw is a neutral minion card, from the Basic set.

Two copies of Oasis Snapjaw are automatically included in all players' collections upon unlocking the druid class.

Two Golden copies of Oasis Snapjaw are a reward for raising a druid to levels 51 and 52.

Oasis Snapjaw is uncraftable and cannot be crafted or disenchanted.

Oasis Snapjaw's main advantage its unusually high Health for its cost. Thus, it has synergy with cards that give Taunt like Ancestral Healing, Mark of the Wild, Houndmaster, Defender of Argus or Sunfury Protector. It can also be valuable for priests, whose Lesser Heal can repeatedly heal the Snapjaw back to full Health with small risk of it being destroyed.

It also works well in combination with Inner Fire and Crazed Alchemist, converting its Health into Attack. Divine Spirit is also very useful with this minion, especially if combined with Inner Fire or a taunt effect.

For a hunter going second, using The Coin to get this out on turn three with a Houndmaster in your hand makes for a very strong 4/9 Taunt minion on turn four.

However, if you don't plan to buff the minion, Stegodon is a better alternative, trading just a single point of Health for Taunt, providing an immediate use for the high health pool.

"Snapjaw" is a common name for the regular, spiked tortoise/turtle found all across Azeroth. World of Warcraft features several types of Snapjaw mobs, including the Oasis Snapjaw, which was the first turtle mob added to the game, and the only one prior to the Burning Crusade expansion.

Turtles in World of Warcraft are similar in appearance, but much greater in size than their real-life counterparts. They can be found both on land, and in water. In Warcraft, turtles, sea turtles, and tortoises are often essentially the same, only differentiated by environment. Turtles are feared by the naga, who consider them bad luck and give them a wide berth on the shores of Azshara. 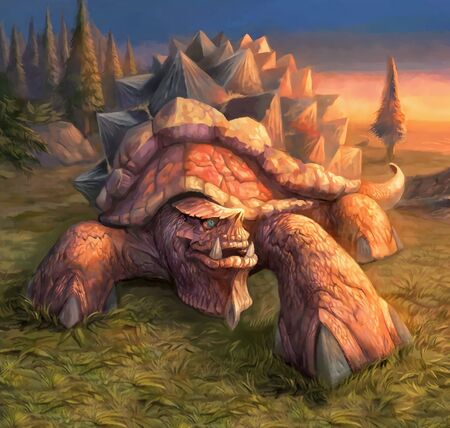