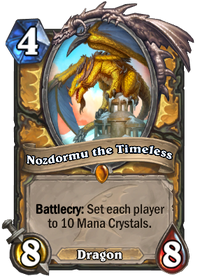 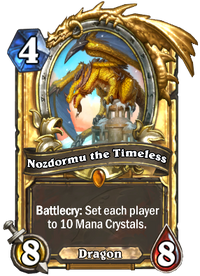 Nozdormu the Timeless is a legendary paladin minion card, from the Descent of Dragons set.

Nozdormu the Timeless can be obtained through Descent of Dragons card packs, through crafting, or as an Arena reward.

Nozdormu the Timeless has very high stats for a 4-mana minion and his Battlecry allows you to play high-mana cards sooner, but with the drawback of your opponent being able to take their turn with 10 mana before you can, and may even allow them to enact powerful combos sooner than usual. However, you will have 10 mana starting from your next turn, allowing you to quickly play expensive cards such as the Giants, Old Gods or lategame paladin spells. Alternatively, Nozdormu can be played on turn 10 as a discounted 8/8 akin to Mountain Giant.

A great card to speed up the game, Nozdormu may seem a little odd, but he can disrupt some of the enemy plays, specially an early game player, as you can follow up with 2 Consecration or Equality+Avenging Wrath.

Nozdormu can be followed up by Nozari or Forbidden Healing, as you will problably suffer a huge damage on the next turn, a great healing can bring you up in no time, and you can combine this with High Priest Thekal and Lay on Hands for a fully prepared hand. On the other hand, you can follow Nozdormu's summoning with Stonetusk Boar+Dinosize.

Spell Damage can be a good follow up combo for a Nozdormu oriented deck. You can play 3 spell damage minions with 2 costs and launch a devastating Consecration, followed by Nozdormu, dealing a good 5 area damage and 13 Hero damage.

Due to having a powerful statline for his cost, he can be a good aim for Evolve and Unstable Evolution as you have a chance to transform any 3-cost minion into an 8/8 without giving your opponent a mana advantage, though the chances of this happening are very rare.

Summon
In time, all things are possible.
Attack
Now is the time!

Nozdormu the Timeless One is the Aspect of Time one of the five Dragon Aspects and aspect king and leader of the bronze dragonflight, the "time police" of the Warcraft universe who ensure that time flows its proper direction. Like the other Aspects, he first appeared as a legendary minion in Classic.

Nozdormu the Timeless One is one of the five Great Aspects empowered by the titans to watch over Azeroth. He fought against the demons during the War of the Ancients. Following this intervention, he retreated into seclusion, immersing himself in his duties. He emerges only infrequently, when events require his direct presence. He intervened in the defeat of Deathwing at the hands of Krasus and his allies, one of the few times he has been seen in the skies of Azeroth. 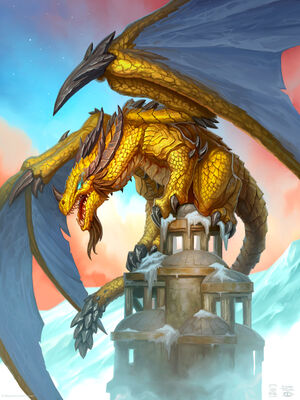