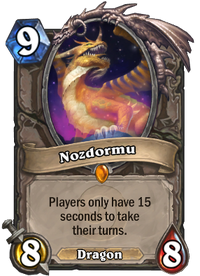 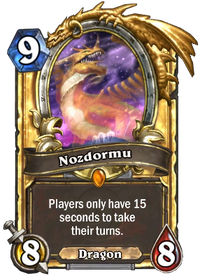 Players only have 15 seconds to take their turns.

Time to write some flavor text.

For the Descent of Dragons version of Nozdormu, see Nozdormu the Timeless.

Nozdormu is a legendary neutral minion card, from the Classic set.

Nozdormu can be obtained through Classic card packs, through crafting, or as an Arena reward. Regular Nozdormu can also be obtained as a first-time reward for first time reaching Legend in Ranked mode.

At 9 mana for an 8/8 minion, Nozdormu appears to be a poor card. Its true power lies in its unique ability to cut a 75-second turn for both players into a 15-second turn. As soon as Nozdormu is summoned to the battlefield the pace of a game quickens in such a way that the opponent may become flustered and rush their thoughts and make mistakes from such pressure, allowing the fast-thinking players to succeed most when playing this card.

This effect generally makes the largest difference against inexperienced or easily flustered players, and those with numerous cards in their hand. It is therefore quite possible for the effect to provide a greater disadvantage for the summoning player than for the opponent, or in many cases an equal disadvantage. In order to avoid this, the summoning player may want to devise a rough plan for their next few turns before playing the card.

A user of Nozdormu may want to sustain the fast pace the great dragon brings to the battle with Stealth shrouding it from your opponent's removal cards such as Polymorph, Hex or even Hunter's Mark. A rogue deck can succeed in this strategy by using Conceal in the same turn you summon Nozdormu, allowing you at least one good attack with the dragon aspect as well as at least one more 15-second turn for your opponent to hopefully make more mistakes with.

Finally, if planning to perform other actions in the same turn as summoning Nozdormu (such as playing low-cost cards or attacking), you may want to do those actions first, wait for a short period of time, then quickly play Nozdormu and end the round. This will ensure that all other animations are complete on the opponent's end before Nozdormu's effect begins, minimizing the time available to the opponent to prepare themselves. This is seen as a bug, and may be considered unsporting, though.

In niche cases, Nozdormu can possibly disrupt long combos with lengthy animations, such as the infinite Fireball Archmage Antonidas combo or Uther of the Ebon Blade-Auctionmaster Beardo OTK. If the opponent is forced to play their combo the very turn after Nozdormu is brought out to survive, they must rush to complete their combo to win or destroy Nozdormu to buy more time. If they fail, they have lost their primary win condition and mostly likely the game.

Nozdormu may also have some utility against bots or players using older or mobile devices; the bots may take a long time to make a move, while older devices may take longer to render card animations and players may take more time manipulating a mobile device. 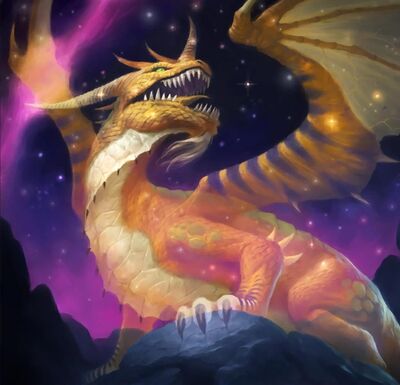 Attack
Your time is up!

Nozdormu the Timeless One is the Aspect of Time one of the five Dragon Aspects and leader of the bronze dragonflight, the "time police" of the Warcraft universe who ensure that time flows its proper direction.

Nozdormu the Timeless One is one of the five Great Aspects empowered by the titans to watch over Azeroth. He fought against the demons during the War of the Ancients. Following this intervention, he retreated into seclusion, immersing himself in his duties. He emerges only infrequently, when events require his direct presence. He intervened in the defeat of Deathwing at the hands of Krasus and his allies, one of the few times he has been seen in the skies of Azeroth.

Nozdormu reappears in Descent of Dragons as Nozdormu the Timeless.