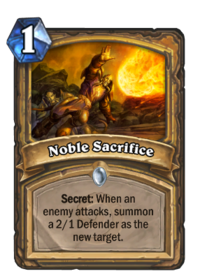 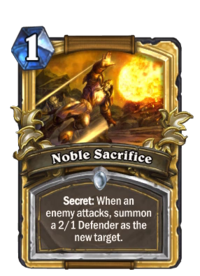 Secret: When an enemy attacks, summon a 2/1 Defender as the new target.

We will always remember you, "Defender!"

Noble Sacrifice is a common paladin spell card, from the Classic set. It summons a 2/1 Defender.

Noble Sacrifice can be obtained through Classic card packs, through crafting, or as an Arena reward. 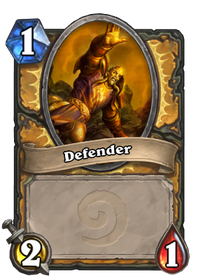 Note that despite his name and role, the Defender does not have Taunt.

Noble Sacrifice will be a part of the upcoming Core set with the following appearance:

This is an excellent Secret for when your opponent is bearing down on you, as the Defender it summons will absorb attack damage and deal light retaliation in return. Noble Sacrifice is best against minions with low Health, or to protect against weapon-using classes such as the rogue and warrior.

If you control a card which can buff the Defender on summon, such as Sword of Justice or Righteous Cause, you can summon a 3/2 to intercept the attack, increasing the lethal potential against the attacker or even allowing it to survive a small attack.

In Secret Paladin, Noble Sacrifice is a great card to trigger Avenge.