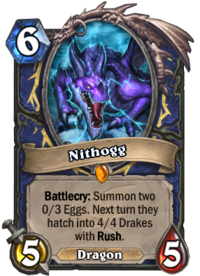 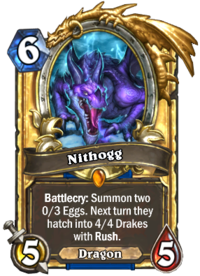 Battlecry: Summon two 0/3 Eggs. Next turn they hatch into 4/4 Drakes with Rush.

Not to be confused with Nithogger.

For the boss of the same name in Galakrond's Awakening, see Nithogg (boss).

Nithogg is a legendary shaman minion card, from the Descent of Dragons set.

Nithogg can be obtained through Descent of Dragons card packs, through crafting, or as an Arena reward. 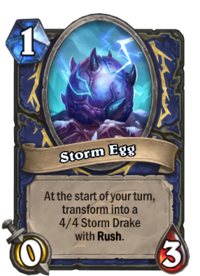 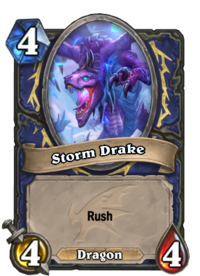 Play when the board is clear or behind a taunt to force out a spell. Usually resulting in a positive trade. Also very good when used with Corrupt the Waters for double battlecry.

Summon
The heavens quake, and my brood awaken.
Attack
Fly, my children!

Nithogg is a storm drake.

Nithogg is a storm drake world boss located atop Nastrondir in Stormheim while Scourge of the Skies is available. He used to be a servant to the keepers, but broke free. Vethir wanted him dead for terrorizing the lands of Stormheim.