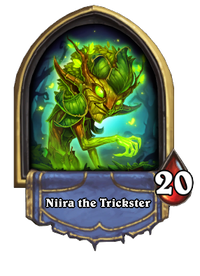 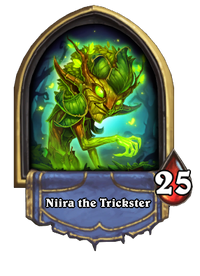 She plays with wee critters... until they're big critters.

Niira the Trickster is a boss that can be encountered during the Monster Hunt.

Take advantage of your taunt and enrage minions and allow the boss to buff your team.

Use beast synergy whenever possible, forcing her hero power to help you.

Drop all them minions you have in hand and build a board. Make her hero power useless.

Build your board, but keep your deal damage cards ready for her minions.

Hagatha the Witch
No games this time, Niira. Finish it!

Niira the Trickster
Yeah, yeah. We can play that later!

Niira the Trickster
Bigger! C'mon!
Hehe, I think I'm winning!
Grow, grow! Faster!
Up, up, up you go!

Mark of the Lotus / Power of the Wild

You're good at this game!
You've played this game before.

Minion with a total of 16 stats

Niira the Trickster
No... fun!

Niira the Trickster is original to Hearthstone. She seems to be of the same species as Blackwald Pixie.