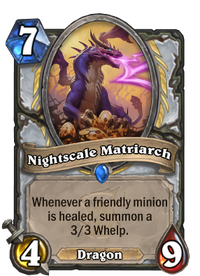 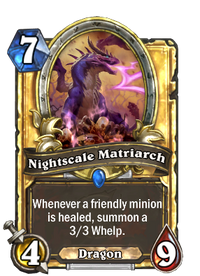 Whenever a friendly minion is healed, summon a 3/3 Whelp.

Nightscale Matriarch is a rare priest minion card, from the The Witchwood set.

Nightscale Matriarch can be obtained through The Witchwood card packs, or through crafting. 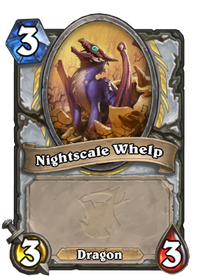 Nightscale Matriarch can be a powerful late-game option for most Priest decks. The Nightscale Whelps it summons provide a large amount of board presence and can be tricky to remove; if this card is kept alive, they can easily get out of control. Cards like Circle of Healing and Divine Hymn, when cast with multiple wounded minions on board, can be used to flood the board with Whelps; alternatively, Squashling can be used to heal a single minion repeatedly. This card's high health lets it comfortably trade into minions and survive to be healed, spawning more Whelps in the process, and combos well with Inner Fire and Lady in White.

Nightscale Matriarch appears to be a member of the twilight dragonflight, similar to Twilight Drake, Twilight Guardian, Twilight Whelp, and Duskbreaker.

While Sintharia's experiments resulted in very unstable twilight drakes, and Nefarian's experiments resulted in infertile or deformed chromatic dragons, their efforts paved the way for Deathwing to perfect the process of breeding and artificially aging twilight dragons. These draconic aberrations were first seen in-game in Wrath of the Lich King, and became major antagonists in Cataclysm. The twilight dragonflight is now nearly extinct, most being killed in the war against Deathwing.

Her flavor text is a reference to Grim Patron's effect triggering quote "Everyone, get in here!".