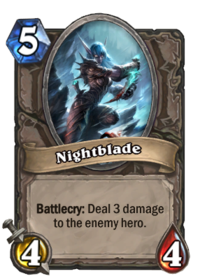 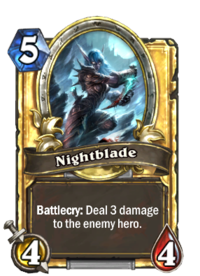 Your face is the place you'd probably least like a dagger, and where rogues are most likely to deliver them.

Nightblade is a neutral minion card, from the Basic set.

Two copies of Nightblade are automatically included in all players' collections upon unlocking the druid class.

Two Golden copies of Nightblade are a reward for raising a druid to levels 53 and 54.

Nightblade is uncraftable and cannot be crafted or disenchanted.

This card's Battlecry is useful in dealing direct damage to the enemy hero. It synergizes with Brann Bronzebeard to double the Battlecry damage, and with Youthful Brewmaster and Ancient Brewmaster to replay the minion and reuse the Battlecry. However, Nightblade has poor stats for its mana cost, and is inefficient in comparison to many other burst damage options.

Attack
This one's mine.

The Nightblades were a faction of night elves seen in Warcraft III'.

Nightblades are a faction within the night elves. They fought alongside the demigod Cenarius against Grom Hellscream and the Warsong clan, and with the help of Cenarius they destroyed three Warsong bases; the Moonhunters, the Starseekers and the Shadowleaves established themselves in the destroyed bases. Cenarius then returned to his base and left the elves to attack the last base of the Warsong clan where Grom remained. However, they failed and were killed by the orcs. 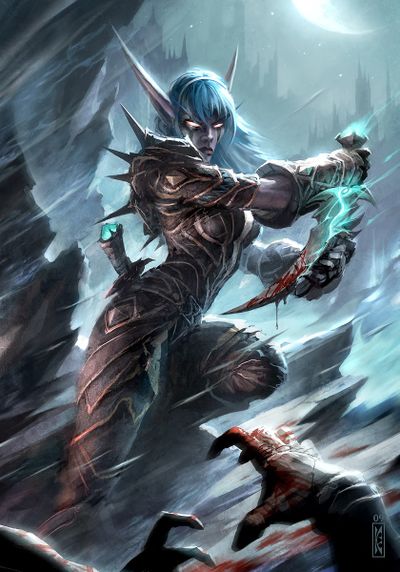