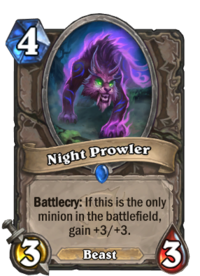 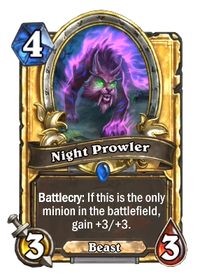 Battlecry: If this is the only minion in the battlefield, gain +3/+3.

Listen to the mew-sic of the night.

Night Prowler is a rare neutral minion card, from the The Witchwood set.

Night Prowler can be obtained through The Witchwood card packs, or through crafting.

Night Prowler is generally too slow and unimpactful for Constructed play. However, if you play it with a board-clear spell (with no friendly minions), it would be a 6/6 Beast, which is a huge problem for your opponent.

This card can be gamechanger in Arena if you use it wisely. Since no one builds an aggro Arena deck, you can trade your minions to make your board empty, then play this.

Another combo with this card is you can summon this after Doomsayer + Frost Nova immediately to get a 6/6. If your opponent doesn't have an answer to your Doomsayer (and if they don't have a minion with Deathrattle that summons another minion) this will be a strong 4-cost minion. Since it has Beast tag, it can be useful with Hunter class with Beast-synergy.