Take control of the portals to free Medivh!

Netherspite is a boss found in the One Night in Karazhan adventure. It is the second boss of the fourth and final wing. 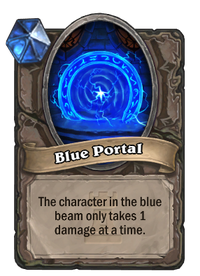 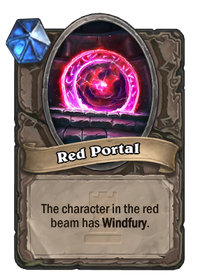 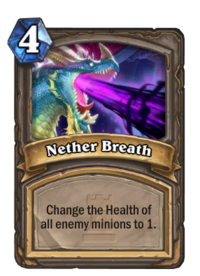 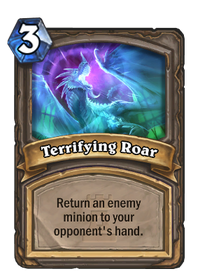 The most critical beam to block is the right-hand one. By placing a Taunt minion in the blue beam, Netherspite will be forced to destroy it one point at a time, although he can use a variety of spells including Terrifying Roar (Heroic), Polymorph, Mulch and Nether Breath (Heroic) to speed the process up. However, critically Netherspite will not attack any Taunt minion with any Attack value that he cannot destroy in a single hit. This means that even a 1/2 Taunt like Goldshire Footman can cause Netherspite to refrain from attacking. Despite this, his variety of tools for removal means Netherspite will not be hindered by any one Taunt for too long, and if the blue beam is ever unblocked will immediately resume attacking the hero; a good number of Taunts is therefore required. With Heroic Netherspite dealing 16+ damage each turn, it is vital to have a Taunt to play on turn 1, making it best to include several such minions in the deck.

While the Taunts are holding Netherspite back, the left-hand beam provides a means for the player to provide strong, if fitful, damage. High-Attack minions work well with the beam's Windfury effect, especially Charge minions like Reckless Rocketeer. The frequency of Netherspite's removal (especially Nether Breath, combined with Arcane Explosion, Swipe or Arcane Missiles) means the player will need to refresh both side of their board fairly regularly, and Nether Breath in particular means minion Health values are often unimportant. Sludge Belcher is a good pick for preventing Netherspite from using board wipes to get unstoppable hits on your hero.

Freeze effects can be effective for buying a free turn, especially if lacking a Taunt; Ice Lance and Frostbolt are ideal. 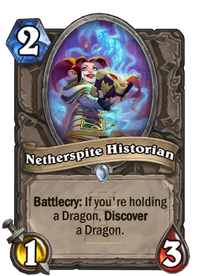 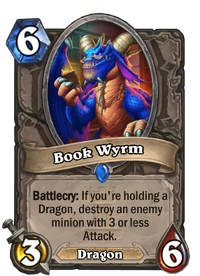 Netherspite
Who disturbs my research?

Moroes
Those beams empower the dragon. Use minions to block them!

Netherspite
Stop touching the portals! The flux modulations are precisely tuned!
Moroes
Just tell us which one has Medivh!

Netherspite
That party sounds fun. Go join it and leave my portals alone!
Moroes
We need those portals! Guests are tossing tomes into the mana pool!

Netherspite
You challenge a dragon in his lab?

Netherspite
So many worlds! So much to learn!

Netherspite
My experiments! Leave them alone!

You again? Why are you always inside my portals?

Moroes
Well done! Now, if I can just recall how this functions...

Stand in the beam!

No, the OTHER beam!

"The very top level of Karazhan is Medivh's private quarters. This is where Medivh opens portals to far off lands. And the creature that helps control those portals is the fearsome dragon Netherspite."[1]

Netherspite assists Medivh in the opening and controlling of various portals, to locations both across Azeroth and far beyond. Netherspite Historian appears to be researching the great nether dragon.

"Oh, splendid! Netherspite is away preparing the arrival portals for tonight’s guests. Netherspite is Medivh’s laboratory assistant and portal master. He also happens to be a dragon, and very serious about his experiments. In addition to his considerable knowledge of all things arcane, Medivh is something of a master of portal arcanology. I’m assuming that arcanology is a word. Regardless, from this very chamber, you can access realms and regions beyond imagination! The possibilities are endless, but we really shouldn’t touch anything." - Moroes[2]

Netherspite's appearance in the Karazhan raid is a distinctive fight involving three coloured beams, which the players must block to prevent the dragon from gaining their benefits. This is recreated in Hearthstone, with minions used to block the dragon's two beams.

Netherspite is an immense nether dragon found lurking in the Celestial Watch, Medivh's personal observatory. As the only dragon found inside the dark tower, he will use his otherworldly powers to vanquish any creatures that attempt to go near him. This dragon's death is not required for further progress into the tower but he does control the trash between the Shade of Aran and the Chess Event. 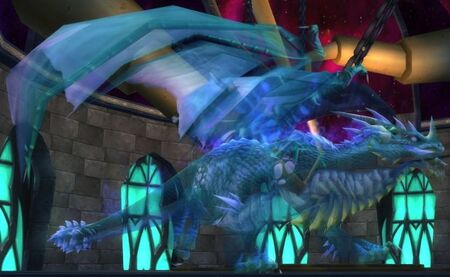 Netherspite in World of Warcraft

Players get a system warning: "Netherspite cries out in withdrawal, opening gates to the nether."

At the beginning of this phase, three portals of different colors will spawn at fixed locations in the room and will begin emitting a beam of their respective color (see below) towards Netherspite. The beams do not slowly move toward him, but rather appear touching Netherspite once they are created.

If the beams are allowed to hit Netherspite freely, they grant him stacking buffs which strengthen or even heal him. The buffs on Netherspite last 5 seconds from last application (instead of the 8 to 20 seconds they do on players). The beams can (and must) be blocked by players who position themselves between a portal and Netherspite. Players blocking the beams are also affected by a stacking buff, having both a positive and a negative effect which grows more extreme with each second that the player spends blocking a beam. Although the positive effects are quite helpful for the fight, the negative effect makes it difficult (but certainly not impossible) for one player to block a beam for the complete duration of the Portal phase.

Once a buff "ticks out" (player leaves the beam long enough to lose the debuff — 8-20 sec), another debuff is applied to the player called Nether Exhaustion, which prevents him from intercepting that color beam for the next 1 minute and 30 seconds.

This part of the fight relies on individual player responsibility in that all players designated to block a beam ahead of time (see below for suggestions) must be aware of what beam they are supposed to be blocking and when so as to intercept it as quickly as possible.

Those not blocking a red beam deal damage or heal the raid. Because of the red beam's unique abilities, healers should not ever waste time healing the tank. Damage dealers need not worry about threat, since the tank has guaranteed aggro while standing in the red beam.

For each Portal phase, one or two players are needed to block each beam. Using one player is simpler, but requires much better gear. Using two players avoids stacking debuffs to dangerous levels, but requires intelligent coordination.