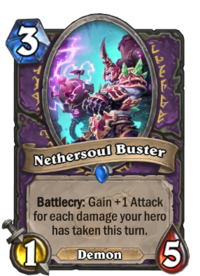 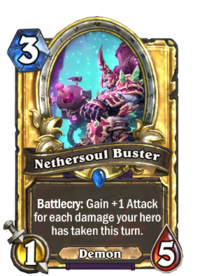 Battlecry: Gain +1 Attack for each damage your hero has taken this turn.

Why did the demon cross the streams? To get to The Other Side.

Nethersoul Buster is a rare warlock minion card, from The Boomsday Project set.

Nethersoul Buster appears to be a fel lord.

Fel lords are a type of large and powerful mo'arg demons in service of the Burning Legion. Towering over their lesser minions, they often wield massive, yet slow weapons. Speculated by some scholars of the Legion to be an evolved version of the common felguard, fel lords serve as enforcers in the direct service of Archimonde. Their cruelty is matched only by their brute force.