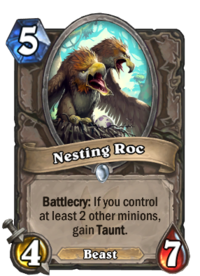 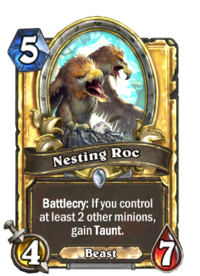 Battlecry: If you control at least 2 other minions, gain Taunt.

Roc eggs are great in omelettes, sandwiches, and as bait to turn poachers into bird food.

Nesting Roc is a neutral common minion card, from the Journey to Un'Goro set.

Nesting Roc can be obtained through Journey to Un'Goro card packs bought through the ingame Shop, purchased online from the Battle.net shop, or through crafting.

This minion is an incredibly powerful Taunt, gaining +1/+1 over Fen Creeper on a fairly easy condition. Even without the Taunt, the statline alone makes it a great choice in Arena.

While Rocs do appear in World of Warcraft, they're either a generic type of large bird or corrupted eagles. Two-headed rocs are original to Hearthstone.