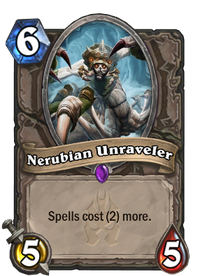 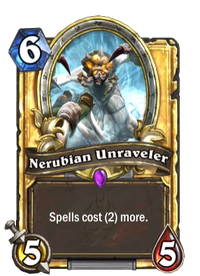 He loves a good yarn.

Nerubian Unraveler is an epic neutral minion card, from the Knights of the Frozen Throne set.

Nerubian Unraveler can be obtained through Knights of the Frozen Throne card packs, or through crafting.

Potentially useful to help build a board while avoiding either losing the game or board control due to powerful spells such as Pyroblast or Mind Control.

For Warlock, Using Darkest Hour to summon it out from the deck early in the game makes your opponent having a hard time to remove minions from the board with their spells allowing your minions to more likely to survive.

Summon
Death to the Traitor King!
Attack
For Ahn'kahet!

The Nerubian Unraveler is, unsurprisingly, a nerubian. It specifically shares the title and artwork of Kilix the Unraveler, a quest giver in the Pit of Narjun in Dragonblight, and appears to be meant to represent him.

Kilix the Unraveler is one of the few remaining nerubians that are still living. He, as well as a few others of his kind, reside within the Pit of Narjun and are strongly opposed to Anub'arak's undead Anub'ar.