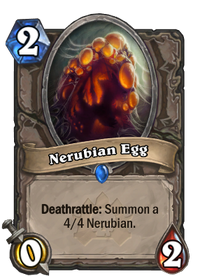 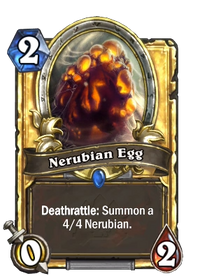 Eggs are a good source of protein and Nerubians.

Nerubian Egg is a rare neutral minion card, from the Naxxramas set.

As a Wild format card, both regular and golden versions of Nerubian Egg can also be crafted for the following amounts: 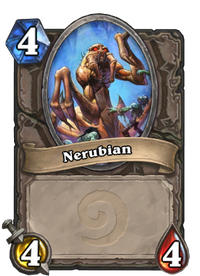 Much like the Ancient Watcher, the Nerubian Egg is a unique minion that has little to no value when played by itself, but excels when used among other cards.

With the threat of spawning a 4/4 minion as early as turn 2, opponents will want to avoid killing the Nerubian Egg as far as possible. This can be played upon to discourage removal, especially board clears. Adding Taunt through methods such as Sunfury Protector or Mark of the Wild will further pressure opponents to respond to the Egg, and in the worst-case scenario use up a Silence effect that could be detrimental for your higher value minions.

While the Nerubian Egg is normally unable to do much in play due to its 0 Attack, enchantments or ongoing effects can allow it to attack. This can be very useful in triggering its Deathrattle, dealing damage to an enemy minion while also spawning the Nerubian. Warlock is a great class for this card, with spells like Hellfire, Shadowflame and Twisting Nether which can destroy this minion as well as the opponent's. Bane of Doom can target this card and summon another Demon, Void Terror can gain 2 Health while destroying the egg, and Power Overwhelming can provide a burst of damage in the process while also liberating the Nerubian.

Players can also destroy their own Eggs through spells such as Brawl, or effects from minions such as Abomination and Doomsayer. While single-target spells can be used, AoE damage is the more efficient method for sacrificing the Egg, allowing the player to simultaneously destroy enemies. 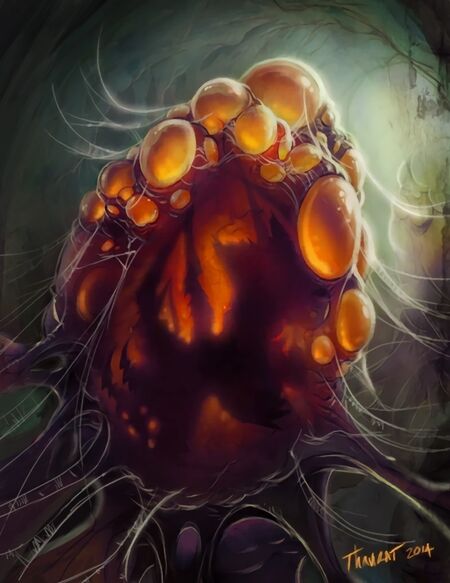