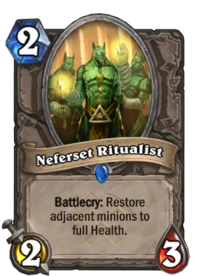 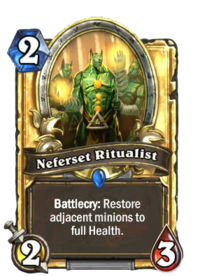 The Neferset are great—they'll always make sure their friends are feline fine.

Neferset Ritualist is a rare neutral minion card, from the Saviors of Uldum set.

Neferset Ritualist is helpful for Priest to complete Activate the Obelisk, potentially restoring a lot of health at once.

Be careful playing this card while you control an Auchenai Soulpriest or any damage-to-healing effect, since this will instantly kill adjacent minions.

Summon
Life is an afterthought.
Attack
Join the dead!

The Neferset tol'vir are a group that decided to claim loyalty to Deathwing in exchange for reattaining their stone bodies, lost due to the effect of the Curse of Flesh, though ultimately they had no intention of maintaining their end of the bargain and believed they could overthrow Al'Akir and the former Aspect to regain their independence. They maintain a strong presence within the Lost City of the Tol'vir, as well as several more regions of Uldum and even Skywall.